I have been asked several times, how much does it cost to have Lasik done on your eyes?

I found out pretty quickly, once the process was started, that Lasik costs more than just the procedure. I did not do much research, but I did know the procedure itself would cost a nice penny.

There are several factors to consider.

Here is the breakdown of what we spent in the first two weeks; the week prior and the week following my Lasik procedure. The amount will gradually go up, as I already know I will need more eye drops. 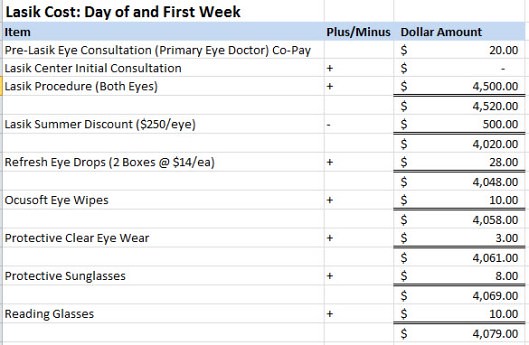 Some companies will include in their employees’ VSPs (Vision Plans) assistance to cover the cost of Lasik. Our VSP did not have coverage for Lasik. So, we planned ahead by putting some of the cost into a Flexible Spending Account, so at least it was pre-tax.

The cost definitely varies depending on where you get the Lasik done. I went to a private doctor that was not affiliated with any of the national chains, such as TLC. My eye doctor had her eyes done with this Lasik doctor, and she partners with him. For a flat fee ($500), she does all the follow up appointments to check your eyes after Lasik. The typical follow-up dates are as follows:

By one year your eyes should definitely be “settled” and not be changing any more. They have all these appointments to check how the eyes are healing, if any additional correction is needed (sometimes, but rarely, a person may need more correction), and how the eyes are in general.

The private doctor is probably more expensive than a national chain. However, I felt more comfortable with him, as he has been performing Lasik since it first came out. The key is to check the reputation of the Lasik center, talk with them, and then make a decision. They are your eyes after all, and if something goes wrong, you want to know they will stand by their work. Looking on Yelp, Facebook, etc. may give you a good idea of a Lasik center’s reputation.